Trazodone hydrochloride is a prescription medication used in the management of major depression. Trazodone has a potential for overdose because the drug is not naturally occurring in the body [1, 2].

The drug Trazodone is primarily use as an antidepressant because of its hypnotic and anxiolytic effect. It is an example of a Serotonin Antagonist and Reuptake Inhibitor (SARI) and produces its intended effect by preventing the action and reuptake of the neurotransmitter serotonin.

It is a phenylpiperazine compound and is the antidepressant of choice because it does not produce the dangerous side effects associated with the use of tricyclic antidepressants. The risk for overdose in Trazodone is lower compared to other antidepressants available in the market [1, 2, 3]. 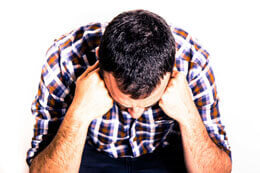 Aside from depression, it is also used for the treatment of following conditions [1, 2, 3]:

The recommended dosage of Trazodone both for adult and geriatric clients is 150 mg once day. The dosage may be increased to 50 mg every four days or three days. The maximum daily dose may be up to 400 mg for outpatients, while hospitalized patients may take up to 600 mg daily.

Pediatric dose is 25 to 50 mg in a day that can be increased to up to 150 mg daily. Any excessive intake beyond the maximum dosage may lead to an overdose. The risk for Trazodone overdoses increases if the medication is taken with alcohol, antihistamines and Central Nervous System depressants [1, 2, 3].

The symptoms of Trazodone overdose are rooted at the excessive effects of Trazodone in the body. It may include neurologic, cardiovascular and respiratory system [1, 2, 3].

Trazodone causes a depression of the central nervous system. The person may feel drowsy and at high levels may fall into coma. They may develop seizures or have difficulty sleeping. Other CNS symptoms include headaches, dizziness and lack of coordination [1, 2, 3].

Cardiac arrhythmias are also possible Trazodone overdose symptoms because of the affectation of the adrenergic rectors in the heart leading to cardiac irregularities. The most common arrhythmias include premature ventricular contractions. Their blood pressure will decrease and may lead to fainting [1, 2, 3].

CNS depression may also lead to respiratory depression. Clients who may have Trazodone overdose usually experience shortness of breath and decreased respiratory rate. Severe depression of the central nervous system may cause the person’s cessation of breathing [1, 2, 3].

Priapism is the prolonged erection of the penis even in the discontinuation of sexual stimulation. Priapism is a result of the antagonistic effect of the drug in the alpha-adrenergic receptors leading to vasodilatation. The prolonged vasodilatation in the penis results in increased blood flow to the area leading to persistent erection. Priapism may be painful and considered a medical emergency because of possible ischemia to the tissues. Similar occurrence may also occur in the clitoris of female patients [1, 2, 3].

Trazodone may also have the effects of decreasing the white blood cell count which may increase the risk for infection [1, 2, 3].

Since Trazodone reduces the white blood cell count, a complete blood count may be necessary to detect any blood dyscrasia. Patients who develop a sore throat may also require blood testing because it may be a sign of infection. Blood testing is also used to detect the actual level of Trazodone in the blood [1, 2, 3].

Treatment of Trazodone overdose focuses on removing the excess level of Trazodone in the body as well as supportive managements for the symptoms.

When a patient has overdosed on Trazodone, they should be brought to the hospital immediately. When they arrive in the emergency department, the initial priority is the maintenance of the Airway, Breathing and Circulation (ABC) of the patient. There may be a need to perform an emergency endotracheal intubation if the patient can’t maintain respiration. An intravenous access needs to be established for the administration of fluids to prevent hypotension [2, 3, 4].

A single dose of activated charcoal may be given to the patient if the ingestion occurred less than an hour prior.  The airway must be protected during the administration of activated charcoal to prevent aspiration. Excretion of the drug through the urine can be improved with the use of diuretics [2, 3, 4].

There is no known antidote for the overdose of Trazodone but the symptoms that have developed during the overdose will be managed through the use of different medications. Seizures are managed by using benzodiazepines. Nitroprusside and esmolol will be able to manage the episodes of tachycardia and instability of the cardiovascular system [2, 3, 4].

Once the patient of Trazodone overdose has become asymptomatic, they can be discharged. Those who have intentionally ingested a toxic amount of medications must be referred to a psychiatrist for an evaluation [2, 3, 4].

Because of the possible Trazodone overdose, patients should ensure that they take only what is prescribed, despite the absence of improvement of the condition. It is still important to take essential measures to keep the drug out of the reach of children.