What Is Caffeine Toxicity?

The drug Caffeine Toxicity is a bitter-tasting stimulant found in coffee, tea, chocolate, energy drinks, and soft drinks. There are also medications and food supplements that contain this drug.

Its main effect is to stimulate the central nervous system which would make the person who consumes it feel more alert and have a boost of energy.

Table 1 shows the amount of Caffeine Toxicity found in common food and drinks [1, 2, 3]. 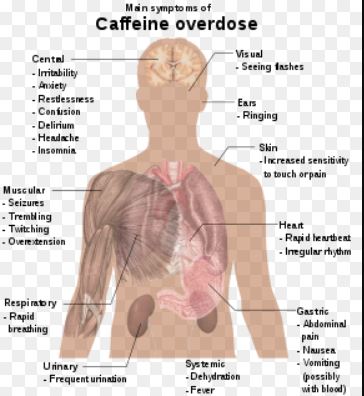 When an individual ingests an amount of Caffeine Toxicity that exceeds to the level that they can tolerate, they can experience symptoms such as insomnia or difficulty to fall asleep, dehydration, dizziness, increased heart rate or abnormal heart rhythm, and jittery or shaky feeling [1, 2, 3, 4].

Ingesting increased amounts of Caffeine Toxicity for a longer period of time may lead to a condition referred to as caffeinism. It affects the central nervous system, cardiovascular system, and the gastrointestinal system.

When a patient arrives in the emergency care for Caffeine Toxicity, the initial priority is to stabilize their condition. The needs of the patient regarding airway, breathing, and circulation will be addressed. Oxygen support may be provided if needed by the patient.

An endotracheal intubation may be performed if the patient is unable to maintain a patent airway. An intravenous access should be established for the administration of fluids and medications. The blood glucose level of the patient must be checked as well.

Those who presented with severe agitation, anxiety or seizures may be given with a short-acting benzodiazepine like lorazepam. Other treatment modalities depend on the symptoms the patient has manifested. Hypotension may be managed with the use of vasopressors such as phenylephrine and dopamine.

The irregularity of heart rate will be treated with a calcium channel blocker or a cardioselective beta-blocker. Extremely high levels of Caffeine Toxicity in the system can be managed through the use of hemodialysis. The patient will be continuously monitored until they become asymptomatic. Referrals to other specialties may be required depending on the severity of the symptoms [1, 2, 3, 4].

The use of Caffeine Toxicity is so common that it may be unusual to think that one can overdose on it. This is dangerous and people should be careful from drinking too much coffee. If you know more about the dangers of Caffeine Toxicity, you can share your thoughts is the comment section below. You can also share this article on your social media sites to help everyone be aware of Caffeine Toxicity.