Diphenhydramine hydrochloride is present in drug preparations such as Nytol, Benadryl, Tylenol PM and Sominex. This drug is usually indicated in allergic reactions and sedation of pediatric clients. 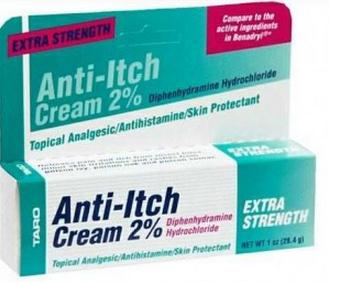 Antihistamine overdose is the 11th reason for drug toxicities with diphenhydramine as the leading antihistamine that causes drug overdose.

The therapeutic level of diphenhydramine depends on the age of the patient. Adults may receive 150-300 mg in divided doses (25-50 mg per orem every 4 hours) in a day, whereas children may receive 75 to 150 mg in a day in divided doses (12.5-25 mg per orem three to four times a day). Intake of diphenhydramine of doses exceeding the therapeutic dose will result in antihistamine toxicity.

Lethal levels of diphenhydramine in the blood include higher than 19 mg/L, 7 mg/L and 1.5 mg/L in adults, children and infants respectively. Overdose of the drug can yield diphenhydramine hydrochloride overdose symptoms.

Diphenhydramine hydrochloride overdose can lead to complications or long-term effects such as:

This long-term effect accounts to most of the deaths from diphenhydramine hydrochloride overdose. This effect results from the blocking of the sodium pump which slows down the myocardial contractility leading to cardiac arrest.

Seizures are uncommon diphenhydramine hydrochloride overuse effect. This is observed in patients with epilepsy, but normal individuals who have overdose of the drug can also experience it rarely.

The result of nerve impulse transmission blockage is a coma due to slowed nerve activity in the brain. The level of consciousness gradually decreases from lethargy to stupor to coma.

The main cause of diphenhydramine hydrochloride overdose is excessive oral or parenteral administration of the drug exceeding the therapeutic level. However, certain risk factors arise such as:

Diagnostic tests for diphenhydramine overdose include:

This test involves determining the level of diphenhydramine through blood tests.

Blood tests for other drugs

Acetaminophen and salicylates are checked in the blood because antihistamines are combined with antipyretic and analgesics in some colds and cough medications.

The electrolyte levels need to be assessed in patients exhibiting cardiac symptoms and CNS alterations. The blood sodium level is usually ordered.

ECG is taken to assess any cardiac dysrhythmias and heart blocks.

Patient with CNS problems and seizure are often subjected to CT scan to determine any underlying conditions. Patients with good improvement and non-focal neurological symptoms are excluded from undergoing a CT scan.

This is performed in patients with cardiogenic affectation to determine pulmonary edema as a complication.

Patients are given intravenous fluids to prevent dehydration. Cardiac monitoring is started and benzodiazepines may be given to manage seizures

The following managements are done to reduce diphenhydramine overdose

This substance enhances the clinging of the drug on the surface of the charcoal in order not to be absorbed in the intestines. Activated charcoal may be taken by conscious patients by mouth. In patients with altered CNS condition, this can be administered through a nasogastric tube.

Normal saline solution is given by bolus to address hypotension. Dopamine may also be administered to elevate the blood pressure.

Patient should be intubated immediately because patients may experience seizures and it may lead to respiratory collapse.

Physostigmine is the antidote for diphenhydramine overdose. This drug is an anticholinesterase inhibitor which passes through the blood-brain barrier to increase acetylcholine levels reversing the anti-cholinergic effects of diphenhydramine.

Sodium bicarbonate is given to those who have cardiac toxicity to improve the heart contraction  The sodium level is taken into consideration before administering sodium bicarbonate.

Treatments for diphenhydramine overdose should be instituted immediately to prevent life-threatening effects and help reduce the risk for mortality. Prevention of overdose include keeping the medication out of children’s reach and administer the medication as prescribed. Never take any antihistamine without a prescription in order to determine appropriate dosage.